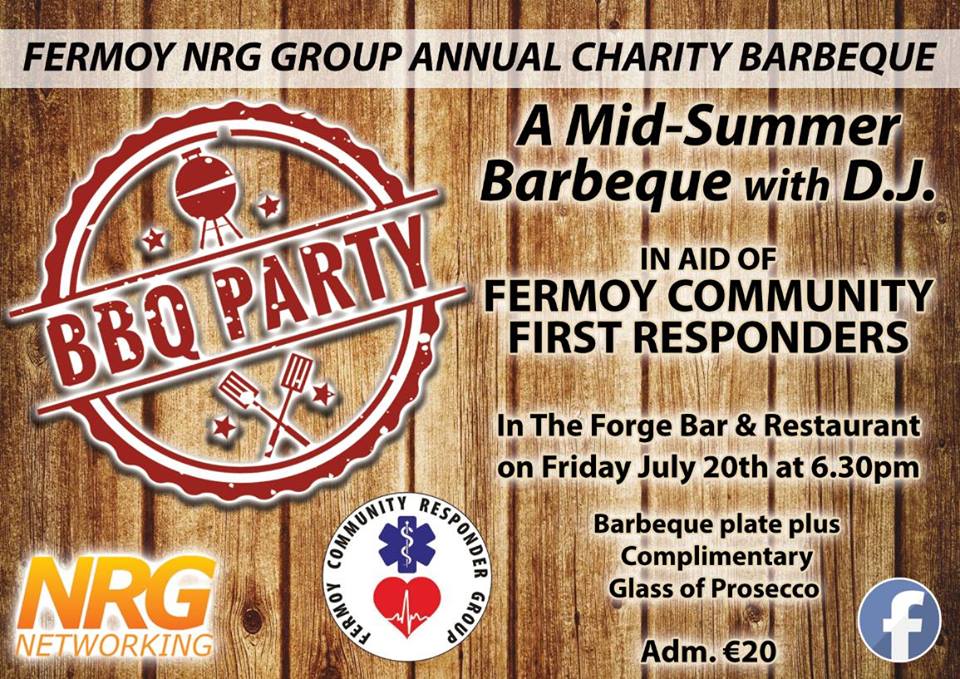 The NRG Networking Group are delighted to once again host our annual Mid-Summer Fundraising BBQ in the Forge Bar & Restaurant, Fermoy on Friday 20th July from 6.30 til late. This year’s proceeds will go toward the Fermoy First Responders, who provide an invaluable service within our community.  The First Responders are all volunteers who operate within the community and respond to incidents within a pre-defined geographical area.

This is the third year of the NRG Group’s Mid-Summer Fundraising BBQ, with the group previously having done some fantastic charity fundraising for the benefit of local organisations.  Most recently they raised €14,000 towards the purchase of a much-needed specially adapted bus for Cope Foundation and almost €8,000 from a sky dive and Summer BBQ for Liam’s Lifts.

The NRG Networking Group is a business networking group that meets in Fermoy Community Youth Centre every Thursday morning from 7.30 until 8.30 and consists of a wide variety of entrepreneurs, business owners, tradesmen, employers and sole traders from the North Cork region.

Tickets for the Mid-Summer BBQ are €20 which includes a food, a glass of prosecco and DJ.  There will also be a raffle on the night with some fantastic prizes to be won and those who cannot attend the BBQ itself are very welcome to purchase raffle tickets 1 for €2 or 3 for €5.  BBQ and raffle tickets are available to buy from Hanley’s Newsagents, Fermoy Community Youth Centre, Frank Morgan Photography & Avondhu Press.

It promises to be a great night and all support would be very much welcomed!

On 5th August I’ll be taking part in a fundraising skydive along with members of the Fermoy NRG Networking Group to raise funds for Liam’s Lifts, a community-based service that provides transport to members of our community who attend oncology appointments and treatments in Cork City. This service is provided on an entirely voluntary basis.

This incredible service is provided on an entirely voluntary basis by members of the community who give up their time to support those affected by cancer.

Liam’s Lifts collects each passenger from their own home and drives them to the hospital or clinic where the treatment or appointment is arranged.  The driver will wait until this is completed and then drive the passenger home again.   This is a free service that operates on an entirely donation basis.

If you would like to sponsor this great cause you can do so online through our Go Fund Me Page at: gofundme.com/skydive-for-liams-lifts or see our Facebook page for more details.