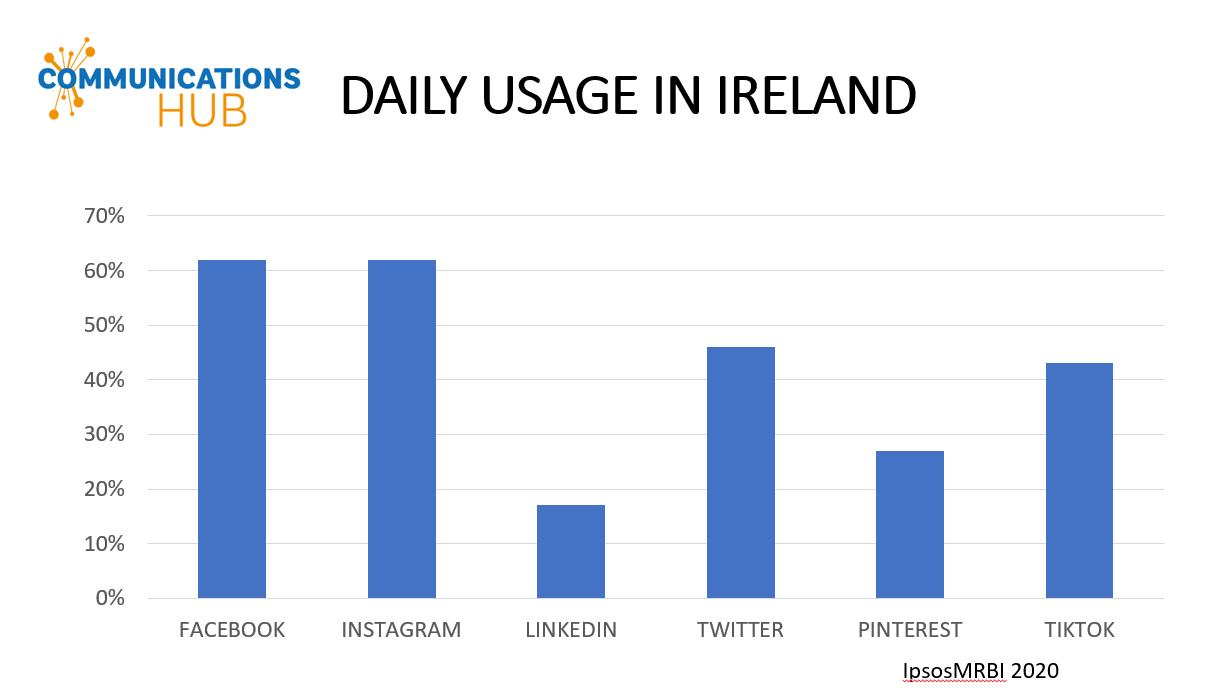 It’s that time of the year again where here at Communications Hub we like to reminisce on all the goings on in the social media sphere of Ireland in 2020!

It’s been a bumper year for digital marketing use in general, and social media has proven no different. The numerous lock-downs have encouraged (maybe even forced, in some cases!) more online activity – and in particular businesses, many of whom struggled to continue to sell and communicate with their customers.

So, what changes exactly did 2020 bring for social media use in Ireland?

As always, my figures come from Ipsos MRBI who release updated figures bi-annually for the Irish market in January and June. Percentages shown indicate the number of Irish people with accounts on each platform as of June 2020:

Unless you’ve been living under a rock in 2020, it should come as no surprise to see that TikTok has experienced the largest growth in the year. If we had a euro for every TikTok challenge video we had to endure, eh?!

Other winners this year were Instagram with a 5% increase, Twitter with 4% and Facebook with 3%. LinkedIn remained the same with 35% of the population having accounts. The only platform to experience a loss in followers was Pinterest, whose popularity decreased by 3% in the Irish market.

The daily usage of each platform remained marginally unchanged for most, except for Twitter which experienced a 5% increase in those logging in each day. As an interesting aside – according to a recent study by Deloite, the average smartphone user in Ireland checks their phone 58 times a day. That’s an increase of 8 times from 2019!

So there you have it – social media continues on it’s upward gallop in Ireland, with very little signs of tiring out!

If you would like some more information on how best to promote your business on social media, get in touch!

One thought on “Social Media Use Ireland 2020”